Matthew here, reporting from the Big Easy. Today was a mix of several different types of activities: more roadtripping, bridges, beaches, seashells with unexpected animals in them, blues festivals, moments where I wanted to hit people/things with the rental car and/or my fists, and food … you know, all the usual stuff

Any of those items pique your interest? Yeah, I’m a sucker for bridges too.

After the amazing wedding ceremony and reception last night (want to read about it?), we left Dallas and made it as far as Marshall, Texas — which was the location of our arranged Airbnb. That’s where I’ll start.

If I were to start this story with the same punctuality as we started our travels this morning, you could take a nap and come back in about 45 minutes.

Yep, we were late. Stop your silent judging — we all do it sometimes.

After sleeping a bit too long then taking a bit too long to get ready, we hopped in the car and headed east on I-20. It was a pretty uneventful drive (probably a good thing), talking about 5.5 hours of actual drive time plus about an hour between all the stops for food/drinks/restrooms.
We did have a couple of snafus with two of our scheduled stops: our morning coffee shop (due to inaccurate hour postings) and our breakfast venue (because we just messed up). These things happen, and as much as we like to adhere to a plan, the Pearons are pretty flexible. So concessions were made, routes were expertly recalculated (by our best buddy, Siri), and we eventually enjoyed coffee and breakfast in two new locations: First Watch for breakfast and Grind & Tamp for coffee. The latter showed off a bit of the local culture.

Fast forward a couple of hours and we’re beginning to see marshland and drive across more bridges than we can remember.
Fast forward another hour or so and we’ve just crossed the New Orleans city limit.

Our first New Orleans event was to eat.
What were you expecting? We’re little piggies.

We found a lunch spot called Pirogues on Bayou Road in the Seventh Ward. It was a tiny little bar with one of the most relaxed hosts we’ve even encountered.  As he approached our table, his first words were “Hey guys. I’m just going to have a sit.”
He then proceeded to do just that, slumping into the booth seat opposite us to take our order.

Alright, I know you’ve paused to think about part of my last sentence, and before you start that silent judging thing again — yes, my wife and I always sit on the same side of the booth; and yes, we know it’s weird.

After wolfing down our meal, we left Louisiana. We took another (shorter) road trip Long Beach, Mississippi.
The trip took us across Lake Pontchartrain and the longest continuous bridge in the world. Twenty-six miles of concrete over water is quite a feat of engineering.

Anyway, the whole point of this side journey was simply to see a beach — and what a beach it was. The photos will say more than I ever could, so I’ll let them.

Every time we visit a beach, I am reminded that people actually do live in places like that, and that little green monster (envy) pops up.
When this happens, I try to employ some logic that I remember my parents using on me when I asked why we didn’t move to Florida: “Why ruin a perfectly good vacation spot?”

I completely understand that response … but every time we walk back to the car and drive away from the smooth white sands, the rolling surf and the gulls, a little bit of my heart gets left behind on the shore. Ugh. 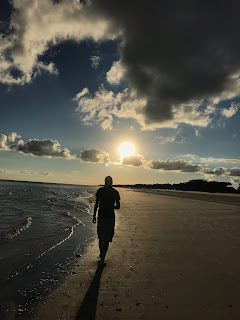 Side Story:
Whilst walking along the beach, I spotted a neat little shell, and insisted Valeri take it home as a memento … then a couple more popped up, so we grabbed those too. It wasn’t until the fourth shell moved on its own volition that I realized it wasn’t vacant … and neither were the ones Valeri had been carrying around. She put them all down pretty quickly.

Since we woke up later than expected, we left the beach later than expected (that’s how we justified the extra few minutes spent at the beach), and returned to New Orleans in time to catch the last of an absolutely phenomenal performance by Don Bryant, Percy Wiggins and The Bo-Keys at the Crescent City Blues and BBQ Festival. Don Bryant was surprisingly animated and engaged the crowd very well, which made the energy about the place a lot of fun. We wish we had a bit more time than we did, but our stomachs were rudely announcing their desire for a New Orleans classic: Po’ Boys. We headed to Parkway Bakery & Tavern for these beauties:

After satisfying our stomachs (and taste buds), we began the trek to our Airbnb.  Due to the location, this process was frustrating. You know that bit earlier where I mentioned wanting to hit people/things? This was that.
We drove past the driveway three times before finally finding our way (via too many one-way streets) to a gate that we couldn’t open.
I hopped out of the car and began the search for a very well hidden lock box.  This normally wouldn’t be a big deal, but it was dark and I couldn’t be sure there weren’t dozen of baddies hiding in the shadows … oh yeah, and once I found the lock box, it wouldn’t open. Cue the hitting things.

Note: If our Airbnb host is reading this, I just vigorously tapped the lock box — I pinky promise.

As I’ve been tapping away at this blog entry, my leftover dessert (Bread Pudding) from Parkway Bakery & Tavern has been calling to me. I’m going to answer it.

For more photos, check out our PhotoStream.

“How did you fall in love with New Orleans?”
“At once, madly. Looking back, sometimes I think it was predestined.”
– Andrei Codrescu