This is Valeri and this post will hopefully be short and sweet … but I can’t promise that.
We woke up this morning sad to leave London. Matthew had threatened many times that he was staying and I just knew I’d miss the beautiful city.
However, I was also a bit excited for Paris – Matthew was not. We both figured this is our one and only time to hit the “city of love” and then be on our way, never to return. Well, my excitement for Paris was wasted.
Let’s begin with the easy part … the Eurostar. This part was simple and we had no issues. We were to St. Pancras by 6:40 a.m. and leaving the station on our way to Paris by 7:55 a.m.
Although Matthew wasn’t excited to see Paris, he was excited to ride the Eurostar. We stayed awake for about 30 minutes, then fell asleep, waking up about 30 minutes before arriving in Paris.
Now, I’m usually an optimist … so much so that it normally irritates Matthew (who is a realist). However, my optimism only lasted about two hours after arriving in Paris. After 1.5 weeks of London’s tube system, we were experts and had no issues. Then we went to Paris where we had no idea where to even start and still had no clue by the end of the day.
After finding our way to the hotel, we then had to find our way back into the city. I had scheduled our day to where we would only need to ride the metro three times (to our hotel, to Paris, back to our hotel), the rest of the day we would be walking along the beautiful Seine River … something I heard we should definitely not pass up because it would be one of the best experiences we had.
All the people who wrote that are full of it. There is a very small portion of Paris that is pretty and you’re just wowed by the architecture … the rest is nothing but graffiti. We even saw a tree covered in graffiti. Who does that?!?!?
Anyways, I’ve sort of went down a rabbit trail here.
Once we arrived in the city, our first stop was the library. It was once one of the largest in the world and from the pictures I’d seen, it was suppose to be beautiful. I did like it, but it was not the most beautiful I’d ever seen and in order to get to where the books were, you needed a library card, so I didn’t get to see the room I was most excited about.
So then we left the library and began our journey down the Seine River. Yes, the river is beautiful, but we were distracted so much by the trash and graffiti that our focus was pulled from the river.
The first thing we came to though that was worth taking a photo of was the Cathedral of Notre Dame. Wow. It was beautiful. We made sure to stop and look a few times at it as we made our way along the bank.

We then were suppose to eat lunch, which by this time it was already 4:30 p.m., so we figured it would be more like dinner. I had planned on us eating at Pizza Rustica, which was a block or two off from the river bank. Oh boy, was that crazy. There were so many people and the streets were very hard to locate, so after about 15 minutes of searching, we just decided on a different restaurant. 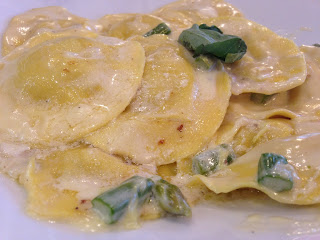 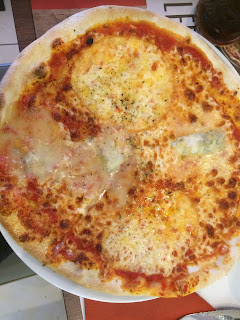 I ordered a 4 Fromaggi pizza and Matthew had a pasta dish. The dishes were okay, but not great.
After a mediocre lunch/dinner, we headed back toward the river to find the Pont des Arts (Bridge of Love). This is the bridge where people used to put a lock on the side of the bridge and then toss their key into the river. Just a year ago they started to cut off all the locks because the bridge was beginning to be unstable, so we were only able to see a few locks on the side of the stairs leading to the bridge. However, the view from the middle of the bridge was beautiful.

We crossed the bridge and heading toward Place de la Concorde. It took us longer than expected to find it, but we happened upon the Louvre. We didn’t go inside, but made sure to get a photo of the outside. This is where we started to enter the gorgeous side of Paris.
The buildings from here to the Eiffel Tower were amazing. 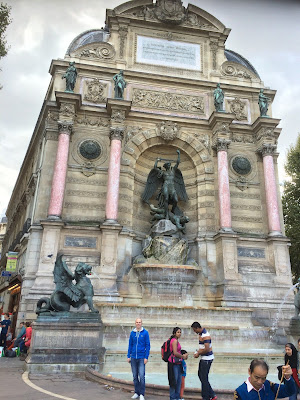 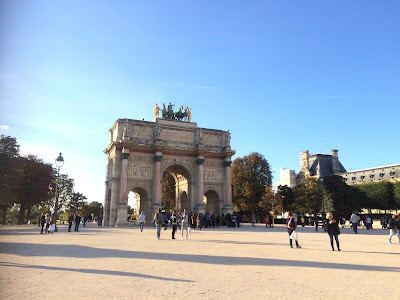 We couldn’t help but be in awe of most of them as we walked toward the Eiffel Tower, which we arrived at right before sunset.
Nothing can quite describe the Eiffel Tower. Even Matthew said he didn’t think he would feel this amazed by it. The best part was a little after sunset when it lit up and then sparkled. The entire crowd all at once made a “wow” noise.
Not even the greatest of poets could have described that scene. However, photos can give a small glimpse into what we saw … just a small one though. 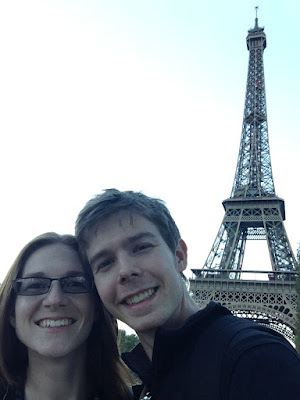 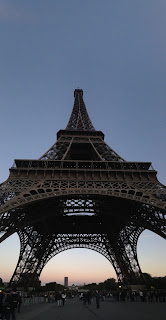 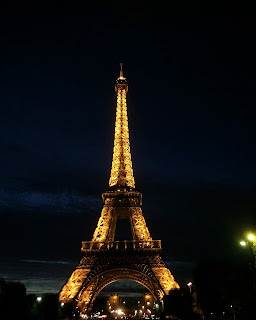 After seeing the Eiffel Tower glimmer, we made our way back to the hotel and arrived … 40 minutes later.

Overall, the only things we liked about Paris was the Eiffel Tower and its surrounding buildings. We were not impressed with the city as a whole and don’t understand what people see in it. I guess if you have the money to pay a taxi/uber to take you anywhere you want and you avoid everything other than the main part of Paris, you’d probably love it.
However, if you don’t have that option and you’re just two people walking from the metro to the Eiffel Tower, avoiding being hit by cars (which almost happened twice even though we had the green light to walk) and not knowing any French, then this city probably isn’t for you.
I will warn you that this was the nice description of Paris. If you’d like to hear a non-sugarcoated version, speak with Matthew and he will be more than happy to tell you of his dislike for this city … and his love for London.

We head back early in the morning. I’m excited for my own bed and my couch. I also miss people who speak English.
We’ll be posting a blog soon about tomorrow’s trip home, followed by one about our pros and cons of London and what we learned during our first time overseas.