Good afternoon! Matthew here, reporting from London.
Today was bittersweet. It brought an end to our London adventure, but will mark the start of our journey to Paris. I can’t say I’m quite as excited as my wife is about France, but it will be a neat trip. We will only be there a day (closer to half a day, really) before heading back stateside. I’ll give you a synapsis of today’s adventure.
We started with coffee at the Attendant. This place was quite a trick to find, as it is completely housed below the sidewalk … and once you walk in, you realize why: It’s a restroom. Yes, you read correctly. 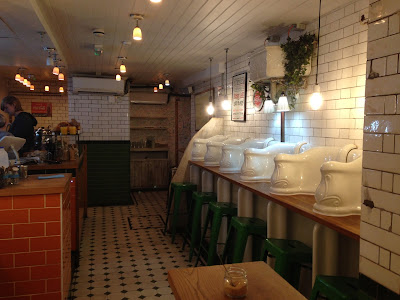 The entire café was built into a re-purposed men’s lavatory. It took a second to figure out, but that made the name that much more clever. On one side of the room was the serving counter and on the other there was a sitting bar, with strange dividers between each seat – as it turns out, those were the tops of the old urinals. By the time all of this had sunken in, it was too late – I had already placed the order and couldn’t carefully back out of the door, taking care to not touch anything. I’m sure they had doused the place in chemicals to sanitize it. I hope. Review coming soon.

After the barista had prepared our coffees – which were prepared in an Aeropress, it was delivered to us in beakers and we were provided wine glasses for the actual consumption bit. That was a bit odd, but a neat touch. Unfortunately, the coffee (you know, the main point of this whole shop) was utterly terrible. I’m not sure what the barista had done incorrectly, but it was just bad. We forced it down, politely thanked the baristas – as they probably meant well – and went on our way.

Our second stop for the day was the British Museum. This place was epic. The sheer size of the place astounded me.
Valeri was very excited about the Egypt Exhibit, so we breezed through the rest of it to see that. While she was perusing the many artifacts, I wandered about the facility a bit and grabbed a couple of photos. Review coming soon.
There was so much to see there, but we just didn’t have the time to spare today.

We began our trek to the next event of the day: The Monument to the Great Fire of London. This was a very neat statue, as you could choose to take the 1 billion steps (that figure might be slightly exaggerated for effect) to the top, and get a neat overlook of the city. Due to the weather and some death threats from our abused feet, we decided against the upward journey.
The base of the statue is covered in massive inscriptions, detailing the fire, and the steps that the city’s leadership took to mitigate the loss. It seems like the inscriptions were written by the people of the city, and you could tell how highly they thought of their leaders at the time. Review coming soon.
The third event for the day was Bond in Motion. I was very excited for this one. The past 50 years of vehicles featured in the James Bond films were all on display in one place. We grabbed the audio guides and a detailed guide book. I have about a gazillion photos of this, but I’ll only post a few here for you. If you want to see more, check out our PhotoStream by visiting CL3VER.life.

After we finished up Bond in Motion, we had free time for the remainder of the day, so we decided to just go walking. We walked through some areas we had already been, and some places that were new to us. We crossed over Millennium Bridge and Tower Bridge, then headed back into town to satisfy our stomachs’ cry for food. We fed it Pizza Express … which was decent. Review coming soon.

After eating all of the food we needed, and then a bit more, we headed back to the hotel, and finished up what packing we had left, in preparation for a very early start to Paris in the morning.
…and that is that! London can be checked off our list, but we have hopes to return very soon. There is just so much to see here that it would take years to even begin to know what is going on – and this is just one city! With all of her quirks, weather oddities and strange inhabitants, we’ve really grown fond of London. As far as we’ve experienced in our short time, the pros of being here far outweigh the cons. It’s a place we could definitely get used to … but more on that later.
Live from London, this has been Matthew Pearon.
Tomorrow will bring greetings from Paris, so check back!
“Why, Sir, you find no man, at all intellectual, who is willing to leave London. No, Sir, when a man is tired of London, he is tired of life; for there is in London all that life can afford.” – Samuel Johnson, 1777