Good afternoon, everyone! Matthew here. I’ll be bringing you today’s report from London.

Good news! We will be adding the pictures in our previous blogs today, because our hotel’s internet is behaving. If you’re like me and like pretty colors and shiny things, browse back through them.
Today’s coffee stop was across the River Thames in Greenwich (pronounced “Gren-itch,” not like “sandwich”). To get to the café, we had to use a new form of transport called the Docklands Light Railway – more commonly referred to as the DLR. Essentially, the London Underground trains and the DLR trains are identical – they even operate out of the same stations. The biggest difference is the DLR is not tunnel-bound. It is primarily above-ground and is usually on a raised platform. The other minor differences are the bigger car size and the lower frequency of stops. From what I understand, the DLR is operated by a company other than Transport for London. Video to come.
After finding our way to Bueno Aires Café (read our review by clicking here), we ordered americanos, then began wandering around the area. 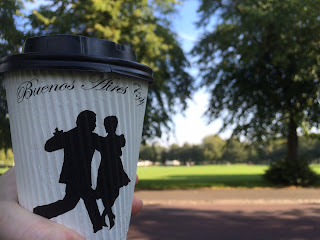 There were several different markets or bazaars going on, so we stopped at a couple of them to look at all the trinkets people were trying to sell.
Largely, it was the same type of stuff you would see in the states. I don’t know what I was expecting, really … all salt and pepper shakers have the same basic design! We did find this very cool World War II-era record player that was still in working order. Video to come.
By the time we finished with the markets, we had already grown quite fond of the area … but then we moved on to the park surrounding the Royal Observatory and that’s when it became a love affair.

The whole area is just gorgeous. It sits about 20 minutes (by Tube and DLR) away from London Proper, so it’s significantly quieter and more laid back. I’m not sure what it would cost to live in that area, but that is where we think we would want to live if we moved to London. I see a lot of GoFundMe campaigns these days for some ridiculous things … perhaps I should spin one up for Relocation of the Pearons!
We began the up-hill journey to the Royal Observatory, walking on a footpath beside a road we never saw a car on … only bicycles and a long board. It was just amazing how quiet the place was. The top had a great overview of London and some beautiful gardens … but the exhibit was not free … and the only real reason we wanted to go in there was to see a specific timepiece and the Prime Meridian. We ended up exploring the area a bit and discovered that beyond a gated area, the Meridian Line had been extended down a wall, and onto the ground in front of the building. Sure, the skyline was missing, but the point was the line on the wall, right? Click here for our review. 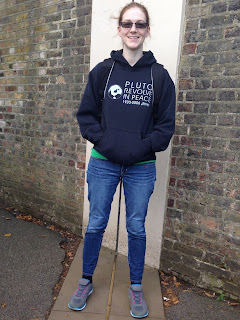 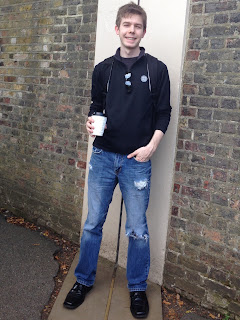 Our stomachs started letting us know it was time for a bit of sustenance, so we made our way back into Greenwich (remember, not like sandwich) to find our scheduled lunch venue, Heaps Sausages. It was a small restaurant, with only four tables and twice as many chairs. I ordered the Bangers and Mash with Onion Gravy and Valeri ordered a Cheeseburger. It was very good and you can see what we rated it by clicking here. 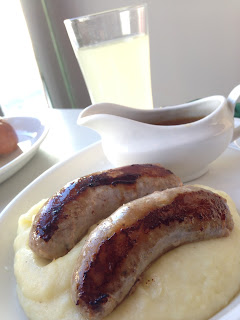 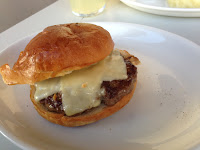 We were then off to explore the O2 and the Emirates Airline and Aviation Experience. The airline is a cable car service that runs over the River Thames, between the O2 and the Royal Docks. We were pretty disappointed by the Aviation Experience – which turned out to just be a glorified entrance to a gift shop. They did have a flight simulator, but it was £45.00 to try out, which is approximately $70 … so we passed on that. Click here for our review. 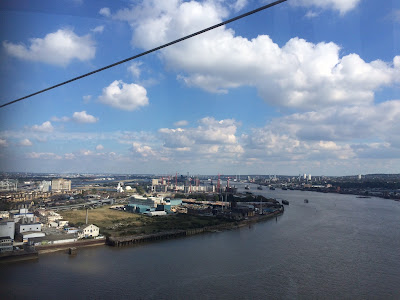 The airline was very neat, though. It landed us very close to a Tube station to take us back into central London to eat supper.

Supper was at DF/Mexico, which was very good. Valeri had the Chicken Tacos and I ordered the Grilled Chicken Burrito and a Horchata. Read the review here. 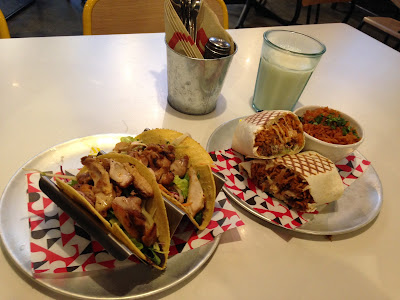 After supper, we snaked our way around the River Thames, taking a few pictures of the building made famous by the James Bond Series, MI6 (Ministry of Intelligence, Department 6). MI6 is the equivalent of the United States’ CIA; whereas MI5 operates like the FBI – inside the boundaries of the Greater UK. 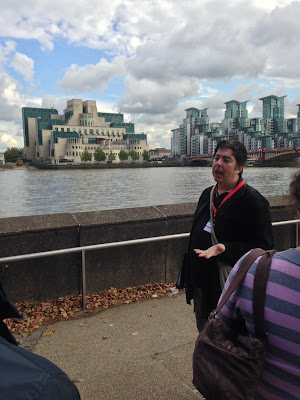