Skip to content
Hey! Valeri here.  We are somehow on our fourth day of London. Not sure how that happened. Everything just needs to slow down.
After breakfast at the hotel, we went out to find our morning coffee. This morning’s choice was Prufrock and we were not disappointed … except, once again, no drip coffee. We’re pretty sure they don’t believe in it over here. It’s all latte this or Americano that.
Hopefully we find some before the end of the trip.
Oh! One thing about Prufrock that Matthew has said he’d never seen before and I found pretty cool, they had one person pulling the shots and the next one designated just for pouring the milk (making designs, etc.). Click here for our review.
After enjoying the atmosphere at the coffee shop for a little bit, we took our lattes with us as we headed toward Buckingham Palace. Something I’ve been very excited about.
However, in order to get there, we had to take the tube. We like the tube normally and have used it quite a bit, but we sometimes forget about rush hour. Which means you have to pack into the train like sardines. This is not as easy to do with coffee in hand. Thankfully, we only had a couple stops before ours, so we were only crammed for about 10 minutes.
When finally arriving to Buckingham Palace, I had a tough decision to make on whether I wanted to tour Westminster Abbey or Buckingham. I had originally decided to tour Westminster Abbey, but once I got to Buckingham, I was just too excited not to go on that tour.
And let me tell you … it was breathtaking! 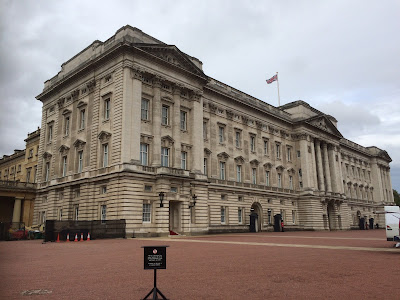 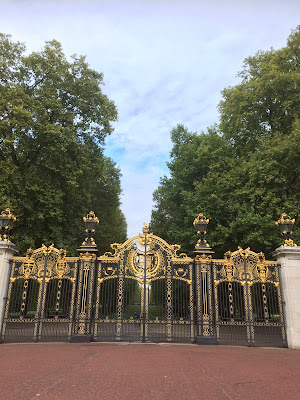 The tour took you through the Palace state rooms such as the State Ballroom, Blue Drawing Room, State Dining Room, Music Room, Picture Gallery, White Drawing Room, Throne Room, Green Drawing Room, Marble Room, Ante Room, Bow Room, Minister’s Staircase, Grand Staircase, Grand Entrance and more. The tour also gave free audio tours, which provided great information, such as a hidden door used by the royal family even today. Click here for our review.
After getting a small dose of royal life, we walked outside and it was raining … while it was 61 degrees and windy. I’m not usually against rain or the cold, but when you’re having to walk 13 minutes in it to your destination, I’m not a fan.
We both agreed if it weren’t windy, the rain and cold wouldn’t have been a bad thing. We’ve been here four days and it’s been in the mid- to lower 60s each of those days, with light rain here and there throughout those days and we were never bothered by it … so it had to of been the wind that made it miserable.
Anyway, we slowly but surely, made our way to our lunch destination, The Phoenix. You know those places where everything just flows so well? Like you barely realize there’s music playing because it blends so well into the look and feel of the restaurant? That’s how this place was. We enjoyed it very much. We both ordered the Geronimo Burger with chips (fries) and it filled us up to the max. Click here for our review. 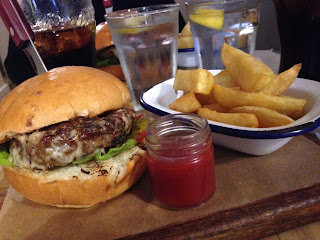 Before the trip, Matthew was really nervous about whether or not he would be full after each meal because their portion sizes here are smaller than in the U.S. Well for the record, we have yet to have a meal where we were not feeling full, if not overly full, by the end of it.
For me, The Phoenix ties for second so far in my “Favorite Restaurants of London” list – tying with our fish and chips meal. It was good, but nothing beats The Troubadour Cafe yet.
So, after filling our stomachs, we hopped on the bus and started toward Westminster Abbey. I was excited to see the Abbey, even if it wouldn’t be for a tour. However, the universe had other plans.
Our bus had to take a detour and there were no stops along the detour, so we just sat back and enjoyed the ride. We finally decided to get off though when it had taken us many, many blocks from where we needed to be. So, we got off …
Big mistake.
Rain, cold, wind, Matthew’s umbrella falling apart, my umbrella has holes in it (hair wet and wind-tossed) and a 10- to 15-minute walk … the Pearons were not a fan.
So what do the Pearons need for cheering up? That’s right … chocolate.
We came across the M&M store. I should have known not to leave Matthew when we decided to get our own bags of M&Ms, but I was too distracted by the smell and the colors that I lost him and before I knew it, he was coming up to me with 600 grams of M&Ms in his bag. 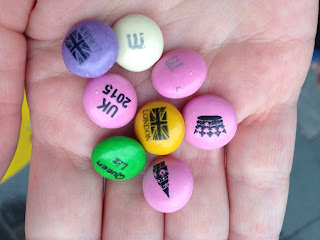 After buying enough sugar to last us the rest of the trip, we were at a loss as to where to go next. We had Kensington Gardens on our list for early evening, but Kensington Gardens has been pushed to another day (along with Westminster Abbey) due to the rain.
No worries though, we found a great back up: The Natural History Museum.
Click here for our review.

Amazing building, interactive displays to the max and SO much information. We weren’t able to make it through the entire museum because we showed up too close to closing time, but we fit in about 1.5 hours.
I would like to say we left the museum with an open evening and thinking “the world is our oyster,” but that wasn’t the case. We are not so good at finding something indoors to do in a foreign city when it’s cold and rainy.
So as much as it hurt Matthew to head back to the hotel before 9:30, we started our trek “home.”
Not before Matthew spotted an Aston Martin parked in a lot though. 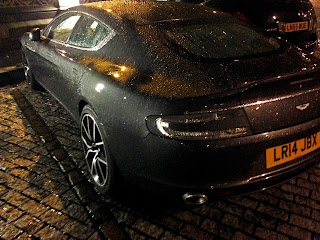 Fifteen minutes and 27 pictures later (yes, I counted) I was dragging him toward King’s Cross Underground and he was looking over his shoulder unable to part from the beauty of the Aston. I told him since he’s already seen three Astons in four days, there’s really no reason for us to go to Aston Martin W-One tomorrow. He disagreed.
Another day gone, sadly. However, tomorrow is suppose to be sunny skies and mid-60s and we can’t wait!
“Why, Sir, you find no man, at all intellectual, who is willing to leave London. No, Sir, when a man is tired of London, he is tired of life; for there is in London all that life can afford.” – Samuel Johnson, 1777