Greetings from London! Matthew here. It’s my turn to write the blog again, so prepare yourself!

The day started bright and early with breakfast provided by the hotel at which we are staying – Hotel Makedonia (read the review by clicking here). As usual, my plate was filled with all sorts of good-looking foods and Val simply had toast and jam. As much as it pains me to say, there is some merit to having a simple taste in food … you don’t get bored with what’s always around!
After breakfast, we dropped our key with the attendant and headed off to conquer the city – and the first in line was our daily coffee run. We visited Kahve Dunyasi this time around and enjoyed a bit of Turkish coffee straight from the ibrik. They served it with Lindt Truffles, which were filled with a cream we had not encountered before. It was quite sweet, but good. You can read our review of Kahve Dunyasi by clicking here. 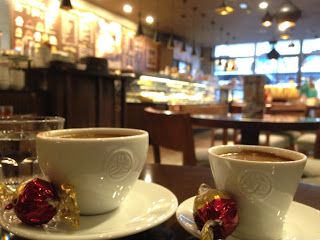 The second stop on our route was the London Library. We arrived about 30 minutes prior to opening, so we had to kill a bit of time in the surrounding area, which happened to be the park at St. James’s Square. After spending about half an hour in the park, we headed over to the London Library, where we were politely informed that we wouldn’t be allowed to enter. Evidently, the London Library requires that you have an annual membership, or a day pass – and that requires good reason. We didn’t think responding with “… but we like books” would get us very far – so we went on our way. 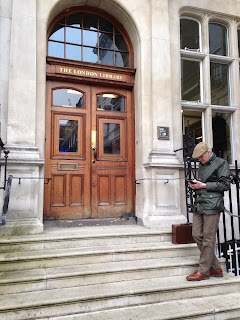 Interesting factoid for you: There has been a controversy over the proper spelling of this area’s name. One camp is in favor of sticking with the original spelling – “St. James’s Square” and the other wants to apply the rules of modern grammar by dropping the trailing “s,” leaving it as “St. James’ Square”. I’m not a huge fan of confrontation and grammar sticklers can get pretty feisty … so I’ll leave you to choose your side and pick your weapon. I’ll stand over here and watch. En garde!
Number three brings us to HK Diner in London’s Chinatown District. Valeri ordered Chicken Fried Rice with Vegetables and I had Wonton Soup. Everything tasted great, but the Wonton Soup had prawns in it, which don’t treat me well – and as far as I recall, it wasn’t mentioned as an allergen risk. I suffered no ill affects, so all was well! Next time we will know to ask questions.  Read our review of HK Diner by clicking here.
After dinner, the London Science Museum began calling our name. This place was absolutely massive!
As you can see, there was a lot going on – and this was all just from the first floor. We were too tired by the second floor to take any more photos. There were a ton of interactive exhibitions and so much technological history all crammed into the building that they had to start stacking things (see below). 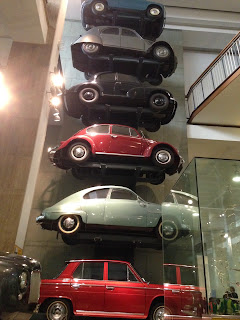 See our review of The Science Museum by clicking here.
We were pretty worn out from all the “sciencing” and we were ahead of schedule, so we headed back to the hotel to kick off our shoes and relax a bit.
Disclaimer: We might have actually had to return because I forgot the iPad at the hotel … but I refuse to accept the blame.
After we rested, it was off to supper at The Troubadour Café … but not before we made a special stop along the way.
This was pretty exciting to finally see. As we were standing gawking at it, an Australian gentlemen came by to make the compulsory joke, “Is The Doctor in?” 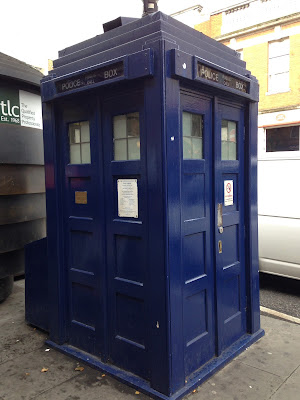 When we arrived at The Troubadour Café, we were greeting by a very nice French waiter, who quickly seated us and offered us starts. 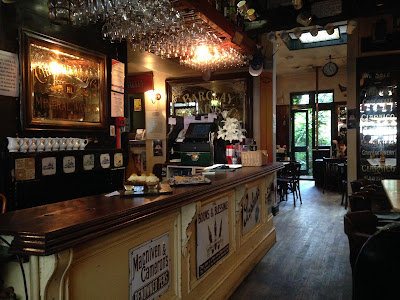 We both decided to skip the appetizers,and jump straight into the good stuff! A word of warning: If you visit this café, and order the chicken something-or-another for two, you might want to find a third person to eat with you. The portion was gargantuan. I’m not sure I’ve ever seen so much chicken on the same plate! 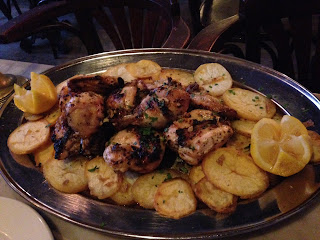 The dish above rocketed the café to first position in both of our opinions. We’ve only been here 2.5 days, so there will be many more meals. However, that one is going to be very hard to beat. If you’ll notice around the edges, there are potatoes that have been seasoned heavily and baked to crispy perfection … and I think I’m in love. I’m not sure what wizardry is involved in creating this dish, but it’s phenomenal. Click here to see our review of The Troubadour Café.
Trafalgar Square was the last stop before returning to the hotel for the night. 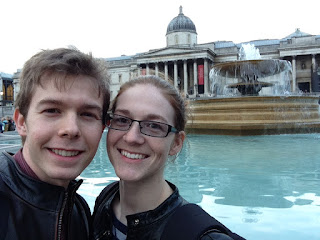 We were just expecting to hang out with the crowd and gaze in awe at Nelson’s Column and the fountains … but London had other plans for us. When we first arrived at the square, we noticed a woman in a Stetson meandering about, then getting a stern look on her face and storming off. This was a little odd, but it’s London, right? The next thing that happened confirmed that the first was indeed strange. A woman dressed as a clown walked into the square, got a very concerned look on her face, then ran to the front of Nelson’s column. At this point, we were intrigued.
We then started noticing several people around the square with headsets plugged into their phones all looking toward the stairs … and at the top of the stairs there was a man dressed in all green on the phone. We figured he must have been communicating with them. We positioned ourselves near one of the “watchers” and kicked on the GoPro … just in case it turned into something really interesting.
Well … it did. A woman dressed in all black approached the top of the stairs, donning a police cap, and began making her way toward the column, arguing with a suited man with a briefcase … then a woman dressed in all blue appeared from nowhere toting a bright blue rolling bag, which at some point was switched with the man’s briefcase. We began thinking a flash mob was about to break out, so we really started watching closely … and that’s when we noticed the Stetson lady had returned, shown the same stern look and exited in the same fashion … and it got stranger from there. It’s too weird to explain here … so I’ll let your mind wander.
It’s about bedtime here, so I’ll sign off! Thanks for following along!

“Why, Sir, you find no man, at all intellectual, who is willing to leave London. No, Sir, when a man is tired of London, he is tired of life; for there is in London all that life can afford.” – Samuel Johnson, 1777

Be sure to check out our photos and other updates at http://CL3VER.life!