Matthew and I made a trip to Kansas City this past Wednesday and Thursday to use the New Theatre Restaurant giftcard my parents gave us for Christmas this past year.
Although the play wasn’t until 7:30 p.m., we wanted to spend a little time in the city before making our way to the theatre. Since it was raining, we chose to have lunch first — hoping the rain would dwindle while we ate.
I looked up some “cheap eat” spots (we love hole-in-the-wall places) in KC and came across two options: The Lunch Box and City Diner. After a quick drive around the area Siri sent us to, The Lunch Box was nowhere to be found.
However, while Siri was rerouting us, we found some awesome graffiti. 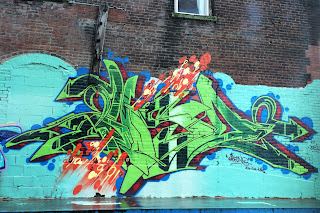 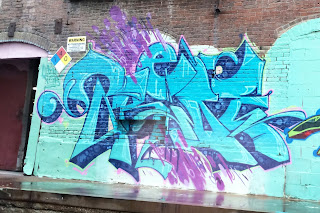 We then made our way to City Diner. The diner had closed just a few minutes before we pulled in, so we decided on the City Market across the street.

Matthew had his eye on a place called “The Taste of Brazil,” which he says was delicious. I was craving a cheeseburger and fries (I know, surprise, surprise) … which was nowhere to be found at the market. I mean, they have like 20 food places and not one has a burger. So we walked down a side street and found me a burger.

See Matthew for a confirmation that I am spoiled; he will tell you many stories. For more references, see my parents or brothers.

Since the rain stopped while we were eating, after the market we made our way to Clark’s Point. I had been there before with my mom about five years ago, but Matthew had never been. I’m a big fan of that lookout point. However, it looked like the trees had grown more since I had been there, so it was hard to see more than the municipal airport and the river.
We then made our way to Ricky and Alyssa Rockley’s house. I was excited to meet their great dane, Taco. They have three dogs (a corgi named Faust, a lab/basset hound mix named Annabelle and Taco) and a guinea pig (named Humphrey). We were able to hangout with them for a bit before we needed to get ready.
After dressing ourselves in our best duds, we made our way to the New Theatre Restaurant, ready for a night of entertainment. 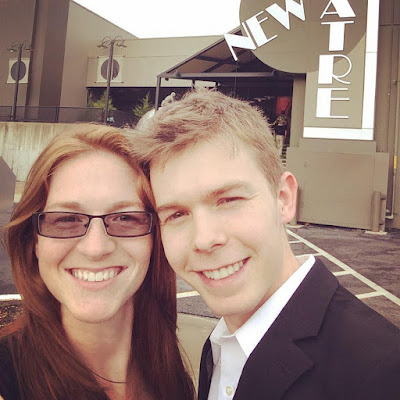 The inside was cool — lights everywhere.

They served dinner at 6 p.m. and the entertainment started at 7:30, so there was plenty of time to eat … and people watch. Dessert was served during intermission. It was all delicious.
Hairspray was excellent! We’re still talking about it and are thinking of making it an annual thing. Such a great production; the acting and singing were top notch … very entertaining. 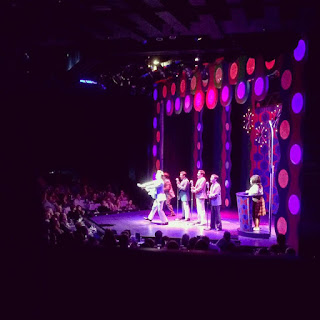 After the play, we headed back to the Rockleys. We didn’t get to spend much time with Alyssa due to work schedules, but we were able to hangout with Ricky most of Thursday. Among other places, we went to two bookstores and somehow I left both places with no books in hand. Not coming out with a book was probably due to the fact I was looking for three specific ones that are on my reading list for this year and was unsuccessful in finding them. Le sigh.

We don’t get to see the Rockleys nearly enough, so it was nice to spend a little time with them while in town. It was sad to say goodbye to Taco, but he gave me the puppy fix I’ve been needing since PJ Harvey passed away.

I mean, how can you not smile when you see this face? 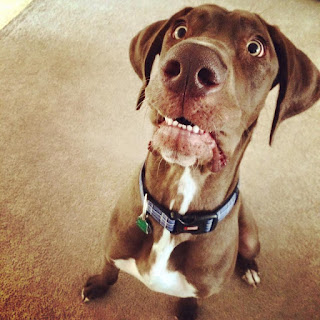 Oh and one more thing about Taco. He’s only eight months old and this is how huge he is. :)
The trip was short, but sweet.

Looks like our next trip will be London/Paris in September, which we get more and more excited about as time passes.

Until then … make sure to keep up with The Pearons at CL3VER.life.